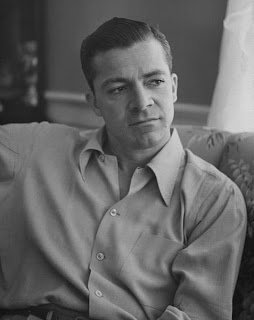 I was twenty when I first became aware of Dana Andrews . His performance in 1946's The Best Years of Our Lives was nothing short of amazing. If I had discovered his movies when I was, say, 10 or so, he no doubt would have joined the likes of Lee Marvin and Steve McQueen as the cinematic heroes my friends and I emulated at the playground. That is, minus all that drinkin' and carousin'; that aspect of cinema tough guys didn't register to this fifth grader. And given the number of war movies Andrews (1909-1992) starred in, he would have been wildly popular among my World War II-obsessed friends. I was mesmerized by Andrews’ screen presence and saw right away that his appeal wasn’t in the way he delivered his lines, but rather his reactions to events around him. Everything the viewer needed to know about a Dana Andrews character was registered on his face. When I started reading up on Best Years’ Oscar wins, I was disappointed, but not surprised, that Andrews didn’t get nominated for the film-- or anything else-- during the course of his career. I knew then that I had a new movie hero. I’m a sucker for an underdog.

Whenever I think of Dana Andrews, two images come to mind: The scene from The Best Years of Our Lives in the soon-to-be-scrapped bomber and how his character confronts his wartime trauma while reliving the sheer terror of that experience; and Where the Sidewalk Ends, when Andrews’ character, after accidentally killing a suspect, stays up the entire night at the police precinct ruminating about what to do. The worn out look on his face come morning is simply brilliant.

As I saw more of his films, I realized that Andrews was his own man; he wasn’t explosive or menacing like the tightly-wound Robert Ryan, and he lacked the smart-alecky disposition of another favorite, Glenn Ford. And even when Andrews is playing a man on the edge, he doesn’t erupt like Ryan might, but instead boils from within, so deep that it only faintly registers on his face, but it’s so well done that I shake my head with amazement at his ability to burn so subtly. Maybe that's reading more into Andrews’ performances than what's actually there, but whatever it is that he’s trying to convey comes across loud and clear and registers right away, even in my chickpea-sized brain. He has some moments in Fallen Angel (1945) where it’s blatantly obvious what is going on in his character’s head, especially when it involves luscious Linda Darnell’s character, Stella. Andrews came of age during a time when men were expected to keep their emotions under wraps, Andrews is able to show the viewer what his character is feeling and thinking without saying a word. I’m blown away by his style, which never-- despite the claims made by some movie buffs-- comes off as “wooden.”

Now, since I’m (ostensibly) an adult, I see Dana Andrews in a different light and with that a whole new wave of associations. I’ve read much about that WWII generation and with the death of my own relatives, it’s obvious to me that Andrews is representative of the “Greatest Generation.” His tightlipped, keep-a-lid-on-his-emotions persona reminds me of my grandfather. Every time I see a Dana Andrews movie, my Generation Envy kicks in and I can’t help but think of how I’d have behaved had I lived in Dana’s time and gone through the things that men like my grandfather went through during their service in World War II. For me, my fascination with that generation is also what makes Dana Andrews so appealing.

The man had his share of personal battles. He was an alcoholic, having overcome that addiction by the late-sixties. Andrews briefly gave up acting to become the president of the Screen Actors Guild (1963-65) and then upon his return, toiled in some truly dreadful horror and cult movies during the 1960s & 1970s, and appeared in numerous TV movies. Like another Twentieth Century Fox star, Henry Fonda, Andrews would spend that decade in films unworthy of his talent and stature. However, unlike Fonda, Andrews would not enjoy a comeback. There would be no career-capping Oscar win, nor any Lifetime Achievement Awards. Andrews would die in 1992, essentially forgotten. I was acutely affected by his death. Upon learning the news, I immediately thought of that Best Years bomber scene and how it held so much meaning for me and realizing that this actor-- completely unknown to many under the age of fifty-- was a treasure. I haven’t seen every one of his movies, but I have yet to be disappointed by anything he’s done. I know that there’s something more going on in a Dana Andrews performance than what the character says, and his brilliance is such that he doesn’t have to say anything at all.