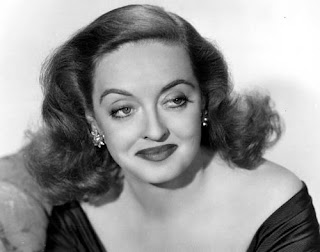 That's the kind of woman I refer to as a Grand Old Dame.

Several women with that same sort of pluck populated Hollywood during the Golden Age, and the persona they crafted existed in real life, too. In fact, the women who played tough old gals who were quick with a quip, bawdy in demeanor and behavior, and who could outdrink the men without a thought.

Some names that come to mind: Bette Davis, Lucille Ball, Shelley Winters, Elizabeth Taylor, and Bea Arthur. These are women who battled their men on screen and off. Whose marriages toughened them and their dealings with studio bosses and sexist directors toughened their attitudes towards men and life. These "broads"--and I use that name in the very best sense of that usually derogatory term--were great raconteurs, who knew where all the bodies were buried and laughed about it. Ever see Bette Davis on The Dick Cavett Show from the early 1970s? Here was perhaps the greatest Grand Old Dame of them all, smoking, drinking, and swearing with aplomb. But also absolutely charming.

As a kid, I knew there was something special about these women who emerged from the studio system run by tightfisted tyrants like Jack Warner, Hal Wallis, and Daryl F. Zanuck, Gals like Davis, Garland, and Taylor had to be tough, or die meekly. Garland coped with booze and drugs and died young, but not before becoming a wonderful storyteller with a great laugh. She could hold a room spellbound with her dramatic and comedic flair. Women like Davis were so much more interesting than their shrinking violet successors of the 1950s and 1960s, where women seemed to take a step back after progressing during the 30s and World War II. They became institutions unto themselves.

Do we have anyone like that today? I don't think so. Liz Taylor is scarce in public these days, and no one who's a star today has that kind of charisma or presence to tell great tales. We communicate more and say less these days, which would no doubt disappoint Dames like Davis.

I recommend the Dick Cavett DVD set Hollywood Greats, to see Bette in action. Judy Garland did an interview on either The Jack Paar Show or The Tonight Show with Johnny Carson. Go scour youtube for those. 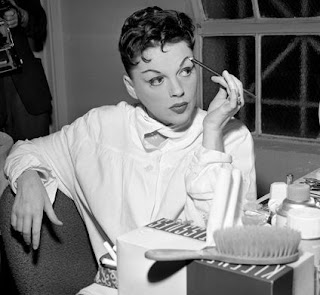 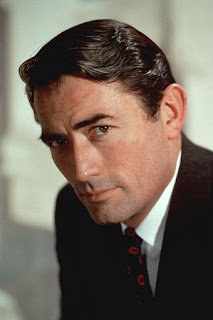 I'm overdue in posting this past month's poll results...So here they are- The winner of the poll question, “Which of these actors had the best on-screen chemistry with Audrey Hepburn is Gregory Peck in Roman Holiday (1953). Of the 79 votes cast, the results are as follows:

I’ve gone on about Audrey Hepburn’s career-defining role in Roman Holiday before, so for this I’d like to recognize Gregory Peck’s 1950s film roles. The Fifties was a decade in which he received no Oscar nominations, but that time period finds the handsome—my wife thinks he’s dreamy-- and popular actor in many disparate and challenging roles. Peck had gotten a few Academy Award nominations in the late-1940s, but became a full-fledged star in the 1950s.

David and Bathsheba (1951) If it was the 1950s, you did a Biblical Epic, or at least you wore a toga. Interesting? No. Varied? Absolutely!

The Snows of Kilimanjaro (1952) Peck as the dying Hemingwayesque writer with a bitchy wife is dying and reflects on better times. Why didn’t they ever do Papa right in those 1950s film adaptations of his work? Only Bernard Herrmann’s score truly soars.

The Man In the Gray Flannel Suit (1955) “That sounds hot”, said the girl at Blockbuster Video back in 1997 when I asked if they had this film for rent. Jennifer Jones was no great actress, but she showed up with her weird ways and indefinite personality to play Peck’s wife, who had already sired a kid during his harrowing WWII experiences. More interesting was that Peck had become the prototypical man of his generation. If men wanted to be Burt Lancaster as he was in From Here to Eternity (1953), then most Joes actually found themselves in Peck’s predicament in this turgid effort. Another fine Bernard Herrmann score, though.

Moby Dick (1956) This is one of Peck’s great roles. He eschews the controlled and lets loose with a buoyant, dark, and obsessive character in Ahab. Plus, Peck himself almost got killed by that rubber whale. Greg wouldn’t explore this megalomaniac until his portrayal of General Douglas MacArthur in the 1970s.

Designing Woman (1957) Greg is a bachelor sportswriter in this splashy and colorful romantic comedy co-starring Lauren Bacall, who was a lot less interesting without Bogart and seemed adrift in her post-Bogart career. To be fair, Bogart had just died when she made this film, and Peck commended her professionalism. This movie could’ve been wonderful, but Peck just isn’t “bachelor” enough. He should’ve thrown in some Ahab wildness here.

The Bravados (1958) Rancher Peck kills off the gang of outlaws whom he believes murdered his wife. A dark, relentless film only brightened by a very young—and not as hot as she would be in middle age—Joan Collins. Peck is one-note here, but acquits himself well in his final scene. Nice cast of character actors in this one.

The Big Country (1958) Peck’s best movie and role of the 1950s. It’s a HUGE, sprawling, epic Western that has William Wyler/1950s written all over it. The Big Country also has one of the great Western music scores of all time in Jerome Moross' effort. Peck is gaining steam again; A good performance from him, and everyone else, too.

On the Beach (1959) Post-nuclear war film set in Australia. Another interesting choice for Peck, who could do anything by this point. Boy, those days were so bad when everybody worried about the Cold War and the USSR. Things are so much safer now! 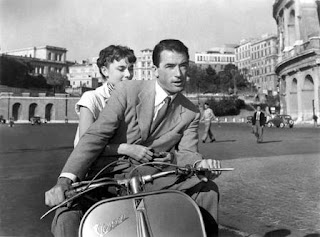 Such a Decent Man: Gregory Peck nine years away from true movie immortality.
Posted by C.K. Dexter Haven at 5:39 AM 5 comments: 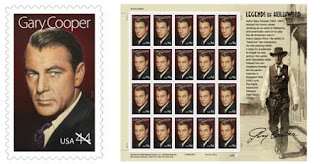 Here's more information on the Gary Cooper postage stamp available through the United States Postal Service--no, I don't work for them--

LOS ANGELES — Iconic actor Gary Cooper returned to a “stamping ovation” today as the 15th inductee into the Legends of Hollywood collectible stamp series. The dedication ceremony took center stage in Los Angeles at the Autry National Center of the American West where the Oscar® for his role in High Noon and Cooper movie posters were on display. All 40 million 44-cent First-Class stamps are available nationwide today.

A cowboy from Helena, MT, Cooper started in the movies by falling off horses during Hollywood’s “Golden Age.” For decades, he was the all-American hero whose believable performances and strong, silent appeal brought him a lifetime of fame.

Unknown to many, Cooper and Ernest Hemingway were close friends who shared a love for the outdoors. They met while skiing in Sun Valley, ID, and hunted and fished together for more than 20 years. Hemingway had Cooper in mind when writing A Farewell to Arms to which Cooper later played the lead role when the book was made into a movie. Hemingway was honored on a stamp in 1989 as the 7th inductee into the Literary Arts series.

“Using the skills he acquired on that Montana ranch,” said U.S. Postal Service Board of Governor member Alan C. Kessler in dedicating the stamp. “Cooper entered the film industry as an extra and stunt double. He eventually traded the stars from Big Sky Country to one on the Hollywood walk of fame as he rode effortlessly into the starring roles of movies like High Noon, The Plainsman and The Westerner.”

Art director Phil Jordan of Falls Church, VA, designed the Gary Cooper stamp using a portrait by artist Kazuhiko Sano of Mill Valley, CA. The image is based on a black-and-white circa 1940 George Hurrell photograph. The artwork surrounding the stamps is based on a still from Cooper’s Academy Award®-winning role as the courageous Marshal Will Kane in High Noon (1952).

“My father would have been very flattered by this honor, but he was always very self deprecating,” said Cooper’s daughter. “If he were here today, he’d probably say, ‘See, look what you get for falling off a horse.’”

When reminiscing about his life Janis said there were “a lot of surface differences in his relationship to Hemingway, but underneath they were somewhat kindred spirits. My father was the only person who could drop in unannounced and be greeted with great delight and open arms. Papa Hemingway often referred to him as the ‘True Gen,’ for true gentleman. Both men respected each other’s silences — there was no need to fill it with constant chatter.”

Janis added that her father had a strong commitment to nature and Native Americans.

“If he were to build a home today it would definitely be green — especially solar energy — as he had a strong sense of conservation.” She recently created the Gary Cooper Scholarship that is awarded to Native American students enrolled in the study of film and television at the University of Southern California.

“The Gary Cooper Scholarship is unique in that it’s specifically designated for Native American students that study in film at USC,” said Scholarship recipient Sonya Oberly, an Osage and Comanche nation descendant and member of the Nez Perce Tribe. “I thought it was cool that I received a cowboy’s scholarship, especially since I’ll be making documentaries about Native Americans.”
-----------------

Sorry I've been remiss in my posting duties lately. I will put up the poll results of the Audrey Hepburn leading man question this week. I was writing something a little different for that one.
Posted by C.K. Dexter Haven at 8:44 AM 2 comments: 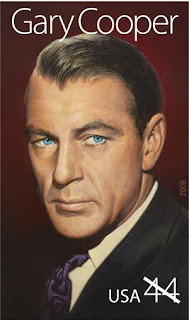 I was pleased to learn that Hollywood Dreamland favorite Gary Cooper has received a United Staes Postage stamp. I'm also pleased to see that it's the more mature Coop, from the period when he did For Whom the Bell Tolls (1943) and The Fountainhead (1949). By the mid-1940s Cooper had become an American institution, and this other institution, the United States Postal Service, has done a fine job in honoring him. I know many people like to bash the post office, but more often than not they get my packages to me in much better shape than their competition.

The stamp looks great, though I noticed that the price has been cancelled out; so much for the belief that people are "basically good"!
Posted by C.K. Dexter Haven at 11:58 AM 3 comments:

Who Ended up Being "The Next Brando"? 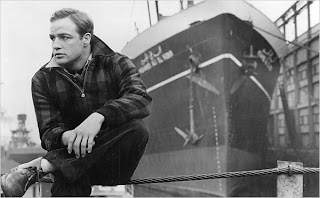 For as long as I can remember, many up-and-coming actors have been given the appellation, The Next Brando. A few names that come to mind:

So who came closest to being "The Next Brando", and what the Hell does that actually mean? Has there been anyone with that kind of effect on the acting profession?

On a related note, I remember a Siskel & Ebert show where they compared the careers of Humphrey Bogart and Jack Nicholson...do these actors have any acolytes?

I guess the influence of Marlon Brando is everywhere, even if it isn't readily acknowledged by today's "hot" stars.

I have more questions than answers when it comes to this (or any other) topic, but I was hoping this could be hashed out in the comments section. Feel free to speak your mind about this important world issue. 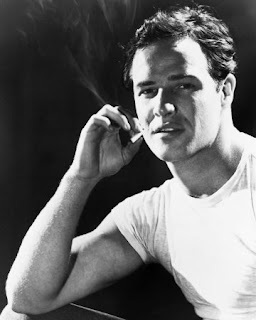 There Will Never Be Another You: Marlon Brando.
Posted by C.K. Dexter Haven at 8:36 AM 14 comments: