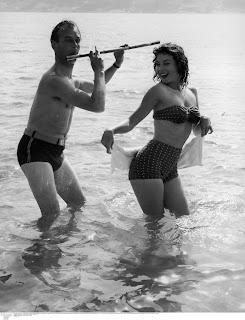 I don't look anything like the guy in the photo above, but if his musical accompaniment is inspired by the gorgeous Ava Gardner, then let this image represent the blogger and his muse! I've been taking a break from this place lately, but am finally working up a head of steam again. I haven't even touched a Golden Age movie DVD or flipped on Turner Classic Movies except once (to watch The Parallax View), and I have been pursuing other interests. But I've started work on that Thin Man overview I mentioned before as well as some Katharine Hepburn ideas. Thanks for sticking around and not getting disgusted with my lack of postings here lately.
Posted by C.K. Dexter Haven at 12:21 PM 7 comments: 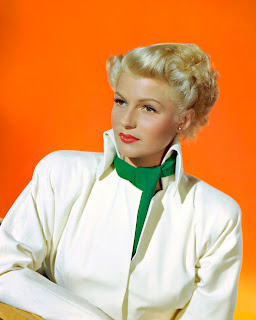 As I continue to age and become increasingly feeble, forgetful, and just plain dopey, I nevertheless come up with theories that appear to be accurate. Case in point: Rita Hayworth. The movie goddess and dreams of millions of men the world over was best known for being a red-headed pinup during World War II. However, in the 1948 film noir The Lady From Shanghai, hubby Orson Welles had Rita dye her hair for her role ass a sick and twisted femme fatale. But you knew all that. Now before I go forth with my crackpot belief, I'll have you know that what I don't know about style could be stuffed into the Grand Canyon. But what I've always found interesting about Rita-as-blonde is how well she makes that look work for her. Rita was of latin extraction, so her looks were such that her dark complexion wouldn't really work all that well with blonde hair. In fact, I see zillions of bleach blondes of all ages out there in the real world and I can tell from their olive or yellowish complexion--or black eyebrows--that they're not real blondes. How did Rita Hayworth pull this look off? Perhaps the fact that Shanghai was filmed in black and white helped. But the color still pictured above shows Hayworth aquitting herself quite well with this look, latina extraction and all. I guess some women are just plain beautiful no matter how they're made up.
Posted by C.K. Dexter Haven at 3:12 PM 9 comments: 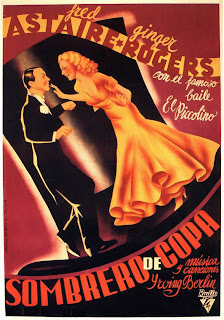 The results are in! The winner(s)of the poll question, "Which is your favorite Astaire/Rogers musical?" is Top Hat (1935) AND Swing Time (1936)! Here's how the carnage looked:


I have no problem with this poll ending in a two-way tie because one could make a persuasive argument for either Top Hat or Swing Time being Fred and Ginger's most beloved film! Swing Time usually wins this contest handily, but this time Top Hat gave the former quite a bit of trouble, as Top Hat led the voting by as many as seven votes early on.

Each film has its own virtues. Top Hat has the better supporting cast, comedic dialogue, and songs. Swing Time has Ginger looking her very best, with all that rehearsal time sculpting her magnificent form to perfection; plus, there's THE dress, which surpasses any and all dresses ever crafted for any film EVER. You can quote me on that. Swing Time also has Fred owning "The Way You Look Tonight", singing it better than anyone ever did or well (sorry, Sinatra). Top Hat has the better pacing, as Swing Time has to burn thirty minutes before getting to a Fred and Ginger song and dance number. This is typical George Stevens bloat, though in a Fred and Ginger film, it thankfully doesn't come close to the director's 1950s indulgences (Giant, anyone?). Swing Time does have the best dance number in "Never Gonna Dance" and that positively tear-jerking finale with fred and Ginger simultaneously singing each other's songs from earlier in the movie, with Ginger taking "The Way You Look Tonight" and Fred handling "A Fine Romance" and it ending triumphantly with their embrace. LOVE that!

As for the other films, I'm rather surprised that Roberta didn't garner a single vote! Not one! Irene Dunne singing like an angel wasn't enough, I guess. Maybe it was that frog-throated dope in the beginning, or Ginger's annoying Russian princess accent that was present even when she sang. Or perhaps it was the unloved studliness of Randolph Scott, whose appearance in Follow the Fleet didn't seem to affect that movie's four votes. I also have to applaud those gutsy individualists who cast their vote for The Story of Vernon and Irene Castle and Carefree. I'd be interested in learning the whys of your selections, other than "it's my favorite"! 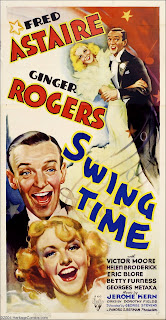 Regardless of which films won or didn't, I always find something to enjoy in even the least of Fred and Ginger's movies, and their worst is 100 times better than a lot of people's "best." I'd rather watch Fred and Ginger "do the Yam" than a lot of other acts doing their best-known numbers! I love these movies that much.
Posted by C.K. Dexter Haven at 2:54 PM 8 comments:

Here he is, Nick Charles himself, playing out the string of a long, productive life. William Powell, the debonair one, the thinking man's Cary Grant. Relaxing poolside with that ever-present cocktail. If one of Hollywood's greatest stars ever had a happy ending, then it was William Powell. Happily married to his (younger) wife of thirty years, Powell retreated into a private, simple life. Apparently he became lovably grouchy owing to his increasing deafness. Any man who endures the death of his fiancee, cancer at the peak of his career, and the suicide of his son has got to emerge a winner. The interview is from Hollywood Studio magazine. Feel that California heat...

This month is Hollywood Dreamland's first anniversary. I was Lazy Bones Jones last month, but have renewed purpose for October. I'll be focusing on Nick Charles with a typically offbeat rundown of The Thin Man series, my favorite films of all time, in what I call the Husband & Wife Detective genre.
Posted by C.K. Dexter Haven at 8:19 AM 15 comments: