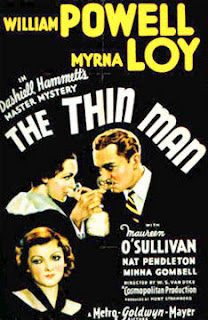 May 25, 1934. MGM released another quickly-produced mystery film starring two of its stars, William Powell and Myrna Loy. That film was based on a Dashiell Hammett novel. It began as just another quickie mystery, but ended up becoming a huge critical and commercial success, as well as being William Powell and Myrna Loy’s defining career roles. Which movie was that again?

The chronicle of the entire series is best left to better writers, so we direct you to Rich Drees’ essential piece on the subject, whereas Hollywood Dreamland will continue to provide its oddball view of the series for the fan who knows many of the Thin Man basics. And we’re spoiler free, as always.

Nick’s introduction is iconic. The camera moves along as a jazzy dance number fills the hotel bar and we see the back of our hero while he’s giving an impromptu clinic to bartenders on the proper way to mix a Martini:


“The important thing is the rhythm. Always have rhythm in your shaking. Now a Manhattan you shake to fox-trot time, a Bronx to two-step time, a dry martini you always shake to waltz time.”


And thus the magic begins. After the ten-minute set up which covers the mystery part of the film, we get the brilliant opening to one of the greatest-ever movie characters. The setting is sophisticated, the joint itself is wonderful, and the character is holding forth on the subject he knows more about than anyone in this old brown world: Drinking. Nick’s intro is mind blowing when I think about it, because it’s easy to take this perfect entry for granted to a character many of us would love to be. There are very few introductions to characters that measure up to that of William Powell’s tippling super sleuth. And as is often the case in things likes this, the shot was the first used and Powell didn’t even know it until after director Van Dyke said “Print”! Such was the ease and expertise of “One Take Woody” who always got a film done under budget and on time.

“Well you might have mentioned me first on the billing.” 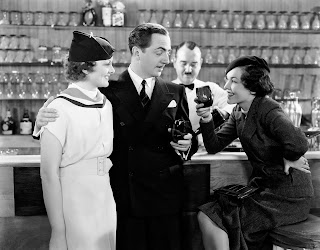 Both Powell and Loy’s introductory scenes were devised by Woody Van Dyke. It’s no small wonder that he would receive a Best Director nomination for The Thin Man. Van Dyke was just as important to the Thin Man’s success as Powell and Loy were. It was he who asked Louis B. Mayer to cast the two as the leads and it was Van Dyke who wanted to direct the property in the first place, as the director was an admirer of Hammett’s work and hardboiled mysteries in general.

“Well, can't you tell us anything about the case?”

“Yes, it's putting me way behind in my drinking.”


Even the trailer for The Thin Man is fresh and amusing because it stars William Powell in character as both of his iconic detective roles. Philo Vance is walking down the street and spots a billboard for the new MGM movie, and Nick Charles, who’s pictured on the billboard, begins a conversation with his former incarnation! It’s brilliant! Imagine if the outgoing James Bond actor had a similar set up with the incoming 007? It’d never happen.


Nora gets the best lines in this movie, though most everything said by Nick is also highly and dangerously quotable. The more I see this movie—and I’ve seen it a lot—and it keeps getting better. Lines I know by heart invoke a smile and knowing laughter, but then more dialogue sprouts up that I hadn’t taken notice of previously! This film is stacked with wonderfully witty dialogue and it never stops! The immediate sequel, After the Thin Man, may have more laughs, but the original is a better film in every respect. It’s still fresh and vital the thirtieth time around as it is the first. I actually didn’t like the movie the first time around! The second and fourth films received several viewings from me before I had seen this one, so I was accustomed to the sequels’ comedic fireworks. I was initially put off by the first ten minutes of mystery-in-the-making. We don’t even see, hear, or know about Nick and Nora until after the mystery has been established. 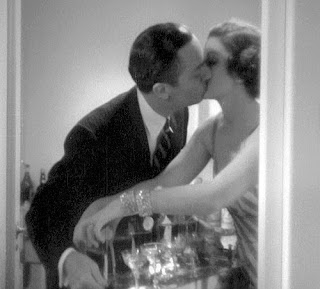 “Say, how did you people happen to pop in here?”

“We hear this is getting to be sort of a meeting place for the Wynant family, so we figured we'll stick around just in case the old boy himself should show up. Then we see this bird sneak in, we decide to come up. And lucky for you we did!”

William Powell snagged an Oscar nod for his first turn as Nick Charles, and boy did he deserve it. The sum of Powell’s total charm, elegance, and wit as Nick can be seen in the Christmas party where he works the room spouting off multiple witticisms and banter while distributing a tray of cocktails. He gives Nora a peck on the cheek and Loy’s smile makes me think that it was an improvisation on Powell’s part. Either that, or Myrna Loy was such a good actress that she can make us believe she was surprised. Whatever the case, she’s great and so is he. Effortless charm! And the scene definitely gives off a “Christmas party” feeling, as there’s much merriment in this scene. And Nora is wearing an absolutely gorgeous (red and white?) striped dress for the occasion; I often wonder why it doesn’t get more attention from style mavens.

Best scene in the entire film: Christmas morning at the Charles’ hotel room. Nora is bemusedly watching Nick shoot the Christmas tree bulbs off of the tree with the new “zip gun” she got him for Christmas. This is the kind of device that the Student School Handbook “warned” us about.

Nick: "I'm a hero. I was shot twice in the Tribune.

Nora: “I read you were shot five times in the tabloids.”

Nick: “That’s a lie. He didn’t come anywhere near my tabloids!”
The Thin Man was filmed in sixteen days in April 1934. The evil, puritanical Production Code amendment was issued on June 13, 1934 which required films to receive a certificate of approval. The Thin Man was released in May of that year, so it would appear that they got their "naughty" content in under the wire. Otherwise, how would that look-fast-or-you’ll-miss-it lingerie ad make it past the censors? Or what about the Nunheim and Marion characters, who live together yet don’t appear to be married? 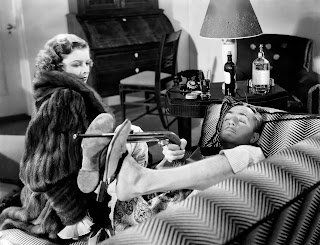 Maureen O’Sullivan: (Dorothy Wynant) Young and lovely O’Sullivan was just twenty-three when she appeared made this movie and she’s a delight. Innocent, beautiful, and she’s one of the few three-dimensional characters in all of Thin Man land. She evinces much sympathy and is a delight to watch. It’s interesting to see O’Sullivan here and then flashing forward to 1986’s Hannah and Her Sisters to see her as a show-biz mother, all boozy and temperamental. All those drinks with Nick must’ve done it.

William Henry: (Gilbert) Hard to believe that the actor who played the odd, bookish, twenty-year-old boy with the carefully measured speaking tones would later become a rugged character actor who showed up in countless movie and TV Westerns! I know him from his brief role as “Dodd Draper” in the 1967 John Wayne film, El Dorado. It’s a splendid reinvention.

Nat Pendleton: (Lt. Guild) He’s there with Nick, trying to solve this case. He shoots off a couple good lines, especially one at Gilbert’s expense. Pendleton had already appeared with Powell in Manhattan Melodrama, where he played Clark Gable’s lackey. He wa suitably dopey in that but he’s not as dim here.

Porter Hall: (MacCaulay) Wynant’s attorney. You may also know him as one of the reporters in 1940’s His Girl Friday. Or any number of assorted attorneys and judges in major motion pictures of the 30s and 40s. Hall was a non-nonsense character actor, the kind they can’t/don’t/won’t make anymore. Hall has the great ability to blend into the background and become the character. It’s what great acting is all about. 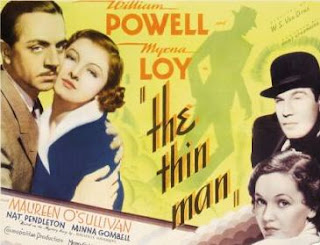 Harold Huber: (Nunheim) This guy’s name gets said more than any other! I found myself saying the name “Nunheim” like an absent-minded obsessive-compulsive! Nunheim is real trash, the kind they still make, unfortunately. But he manages to elicit sympathy because he’s such a pathetic sap.

Gertrude Short: (Marion) Nunheim’s shacked up with this tootsie, and she’s brilliant! Short has more charisma than most leading ladies today. In The Thin Man, Marion and Nunheim have, shall we say, a less than ideal relationship. She really lets poor Nunheim have it, too.

Edward Brophy: (Morelli) Another “repeat offender” in the Thin Man series. He also appeared as the shrub-loving postcard salesman, Brophy, in The Thin Man Goes Home. Here he’s the dangerous and ill-tempered Morelli, who holds Nick and Nora at gunpoint in their bedroom. Morelli was carrying on with Wynant’s mistress and is a key suspect in the latter’s death.

Cesar Romero: (Chris) He looks suitably menacing and is a deadbeat all at once. The always-enjoyable Romero would enjoy a sixty-year career as a variety of amusing roles. This is the earliest role I’ve seen him in.

Edward Ellis: (Wynant) As most aficionados know, Wynant is the title character. The tag was so catchy that it came to mean any movie in this series. The character’s a curmudgeon and a philanderer, too. I’ve only seen Edward Ellis in a Garson Kanin-directed called A Man to Remember (1938). Ellis plays a small-town doctor and he’s vastly different from the jerk he plays here. The film would appear to be rare because the print TCM showed had Swedish subtitles on it. Perhaps that was all that could be found. 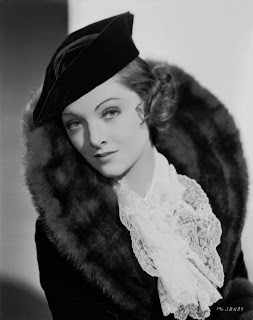 The film’s lovely is again Myrna Loy, who simply radiates with intelligence, beauty, poise, and cool—long before that word’s meaning was killed through misuse. This is Loy before that “Ideal Wife” nonsense killed her original appeal. In her maiden voyage as Nora Charles, she’s just amazing and we’ve never had anyone like her. Loy’s an original, that’s for sure. It's a crime that she was overlooked at Oscar time. A crime. 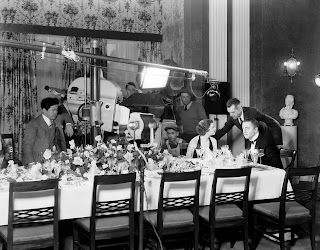 The finale is done in typical mystery fashion, the assembly of the suspects. Nick and Nora do this with style also, as it’s at a swank dinner party with Nora wearing an amazingly sexy black evening gown. I’m told its black satin, but it looks more like leather! Yowza! Of course Nick solves the mystery of Wynant’s death and while it may take a few viewings to entirely remember the large cast and their motivations and connections, the wit and undeniable chemistry between Powell and Loy will bring you back time and again. There’s nothing more comforting than a cherished classic movie to lift one’s spirits again. The Thin Man does it for me every time.

If I had to live my life in a movie, it would be as Nick Charles in a never-ending Thin Man mystery. I’d crack wise, banter back and forth with my lovely wife, have the best dog ever, and hold a perpetual cocktail in my hand. The Thin Man is well-loved by classic movie lovers, but I still feel—despite the strong sales of the Complete Thin Man Collection DVD set—that it is a film, and series, largely unknown by the general public. It’s known mostly through word-of-mouth and via regular runs on Turner Classic Movies, which is probably the only channel that airs these films. I think of the series as a well-kept, but open, secret. 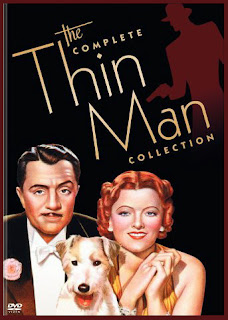 What are you waiting for? Get this now!
Posted by C.K. Dexter Haven at 2:46 PM