It's Ginger Rogers They Come to See, Part II 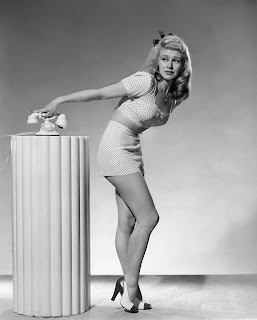 I guess I'd better thank Turner Classic Movies for making Ginger Rogers their March Star of the Month! This, my own miserable corner of the bloggosphere, has received maybe four times the amount of visitors--and spammers--since Ginger's movies started being shown on Wednesdays. As mentioned before, the most popular search term is "Ginger Rogers [sans clothing]", with "Gloria Grahame [sans clothing]" hanging on to second place; they won't find that stuf here, though, this is a family-friendly blog. Star of Midnight (our April, 2009 review has new screen caps--take a look), a delightful Thin Man-esque mystery starring Ginger and William Powell, also gets searched a lot, and of course Ginger Rogers Swing Time Dress, which has been lifted from here more than any other photo that *I've* nipped from other sites!
I'm thrilled that Ginger still wows 'em! I like to think that she's gaining legions of new fans with every re-airing of Swing Time, and that some drably-attired "T-Shirt and Jeans Girl" will discover the glamour that is the Golden Age of Hollywood.
Posted by C.K. Dexter Haven at 11:02 AM