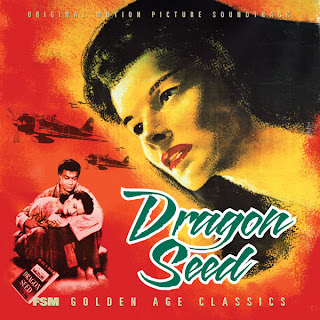 In a previous post, we reviewed Katharine Hepburn's performance in the WWII drama/propaganda film, Dragon Seed. Today Film Score Monthly (FSM) has announced the release of Herbert Stothart's magnificent score to this film, in a 1000 copies-only limited edition. And it's in stereo which is a rarity indeed for a film of this age. Stothart's music is the best thing about Dragon Seed with its Far East, Exotica feel and lush and sensitive arrangements of folk songs and original material.

Sound samples available at FSM's homepage or at Screen Archives Entertainment, who distributes Film Score Monthly's releases. Price is $24.95 + shipping. They have numerous other film scores for sale and are all legitimate and are absolutely NOT bootleg releases. I cannot recommend them enough!
---------------------------


Dragon Seed (1944) was based on the 1942 novel of the same name by Pearl S. Buck. Like her Pulitzer Prize-winning The Good Earth (filmed by M-G-M in 1937), it is set in the turbulent world of China just before and during World War II and—like its predecessor—tells a story of family and personal tragedy set against an epic background of political struggle and armed conflict. M-G-M lavished an impressive and expensive physical production on the film, budgeted at an unprecedented three million dollars. Katherine Hepburn headed the A-list cast.

The studio similarly drew on top-drawer talent by assigning its finest musical dramatist, Herbert Stothart, to score the film. Stothart had already scored The Good Earth, and for Dragon Seed he created another strong, effective score rife with Asian color and lavish themes—including authentic folk tunes and national anthems. Stothart made extensive use of pentatonic scales and what were then considered “orientalisms,” but stamped the music with his own blend of lyricism and dramatic pulse that is sometimes tender, sometimes explosive, and always apt.

Due to the existence of dual microphone perspectives, FSM has been able to mix nearly all of Dragon Seed in genuine stereo. The sound quality utterly belies its age (over 65 years old). This 2CD set contains not only Stothart’s complete score, but numerous bonus tracks, including the trailer music and an alternate English-language version of the main title. The edition, limited to 1,000 copies, includes notes by Frank K. DeWald and Alexander Kaplan, numerous film stills and publicity materials in a 20-page booklet designed by FSM’s Joe Sikoryak.

Dragon Seed joins Random Harvest/The Yearling (FSMCD Vol. 9 No. 13) and Northwest Passage(FSMCD Vol. 12 No. 18) in FSM’s growing catalog of scores by this under-appreciated film music titan. Golden Age fans will rejoice and listeners unfamiliar with Stothart’s legacy are ripe for a major discovery. 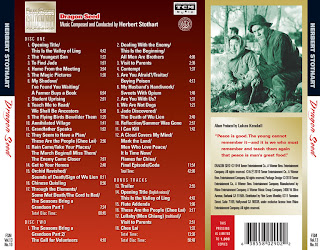 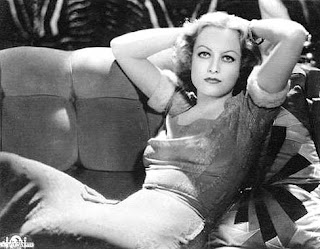 I rarely need an excuse to post a 1930s photo of Joan Crawford, but with Tropical Storm Bonnie mere minutes away from the Florida coast, my thoughts turn to the memorable experience watching the 1932 film Rain, starring Crawford and Walter Huston. The purpose of this post is to put my thoughts down before I go and see the movie through adult, pre-Hays Office eyes. It'll be interesting to see if my childhood impressions hold up.

When I first saw Rain, I was about thirteen years old and it was either a Summer afternoon or me home sick. It was on one the local PBS stations early in the afternoon. It was a sunny day but for some reason I was marooned indoors. Rain was the first time I can recall watching a movie that old that wasn't a Chaplin or Laurel and Hardy feature. The movie, while not typical fare for a 1980s teenager, captivated me because of the environment it created, the mood was spellbinding. From what I remember, much of the story took place in a tropical region and perhaps in a greenhouse or plantation-style estate. I knew who Joan Crawford was thanks to Faye Dunaway's career-destroying performance as Joan in Mommie Dearest so naturally after that dysfunctional rollercoaster ride I became interested in seeing just how "nutso" this woman was.

The movie seemed more like a filmed play and the effect of that early talkies sound recording brought home the fact that I wasn't watching a Spielberg movie.

Aaargh! Rain is out of print and fetching big bucks on the secondary market! (Plenty of Keannu Reeves and Shia Lebeouf movies still available, I'm sure). My hopes now lie with Turner Classic Movies, so I guess I'd better pray for...ah, forget that.
Posted by C.K. Dexter Haven at 7:06 AM 10 comments:

A Word from Our Sponsor(s) II 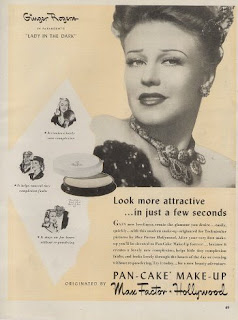 Oops! I forgot to include these ads with the last post--Blogger is still unwieldy to me--and these I've had on my hard drive for years! Here's Ginger Rogers again, hawking makeup and that perennial, third-place cola, Royal Crown! I'd buy RC if it were ever available! I seem to dimly recall it being in the soda machine at the Whiting Hall public swimming pool (along with Frosty root beer) back in 1980, but haven't seen it in machines since. Anyway, Ginger Rogers must've done scores of advertising because she's by far the actress I've seen in these things. I'll have to peruse my Taschen books' All-American Ads: the '40s for more examples. If you've never seen these giant, full-color books filled with vintage ads, then seek them out immediately! I believe the '40s edition is out of print, but the 1930s volume is still around. 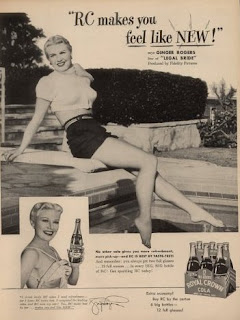 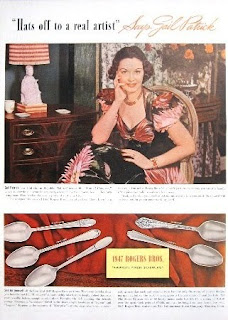 Hey, it's my old love Gail Patrick! Gail, ever the sophisticate, is plugging for Rogers Bros. silverware here in 1947. This would be near the end of Gail's film career and she would go on to beat the men at their own game as a producer. Does the TV show Perry Mason ring a bell?
Posted by C.K. Dexter Haven at 7:49 AM 7 comments: 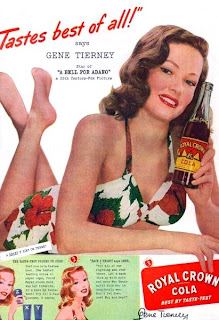 Just as they do today, major motion picture stars shilled for products in the days of yore. It's especially noteworthy that the female actresses of the day were particularly prominent in product ads, as I'd imagine that much of their income could be derived from such work. There's no doubt that many stars, like Ginger Rogers, got the bulk of their cash from advertising work, whether for radio or in these lovely print ads. Rogers even mentions in her autobiography how she wasn't paid as much as many other performers and therefore had to work continuously to support her lifestyle. 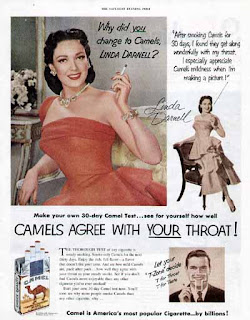 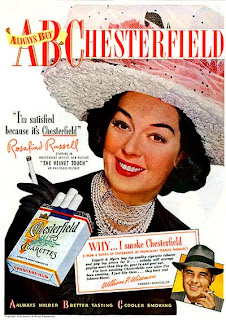 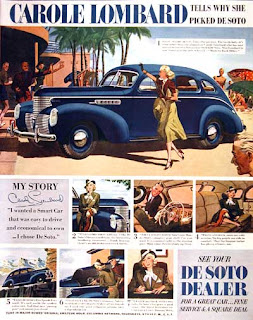 This Carole Lombard ad is my favorite of the bunch, as it conveys that glamorous California/American West feeling that is grafted to my memory, despite me never having set foot in California or the 1930s... 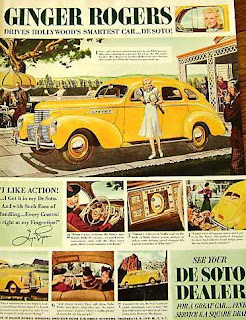 I love these illustrated print ads, as they show an idealized vision of the products even better than photographs do, as they require almost no touch up as photographs would beginning in the 1960s, when illustrated ads took second place to their photographic counterparts. 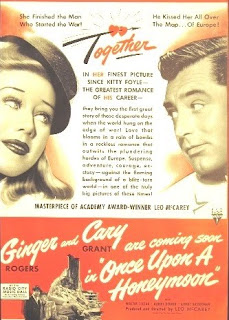 After you've purchased and consumed these products, why not head out to the cinema and see the latest Cary and Ginger masterwork?
Posted by C.K. Dexter Haven at 9:24 AM 8 comments: 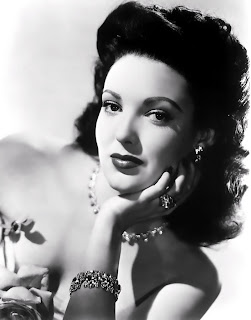 It's hard to believe that I've only seen one Linda Darnell movie, Fallen Angel (1945). She's certainly great looking and not a melodramatic sort by any stretch. I grew up knowing who she was because my movie-loving grandmother was quite a fan of her. And my grandmother, ever the cheery optimist, never failed to mention Darnell's tragic early death in a 1965 house fire. So, with that happy story in mind, I need to explore Darnell's work, a project that very well might collapse if I learn that she appeared in nothing but empty-headed costume epics and crapola "historical dramas."

Darnell, as she appeared in Fallen Angel did a number on my brain because her Stella character came across as both hardened working girl and a fleeting wisp which nobody could possess. It's easy to see how Eric Stanton (Dana Andrews)--or any man-- could go koo-koo for her.

Speaking of Fallen Angel, there's a massive spoiler-filled rundown of the film over here. It makes anything I might write here redundant, but that won't stop yours truly from attempting a future review, using "newly developed" screencap technology. 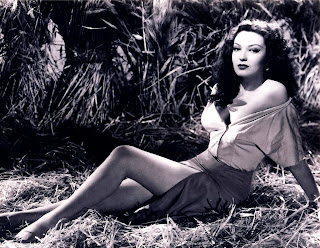 Ethnic Linda: Made up to look like a foreign and "exotic" peasant girl. 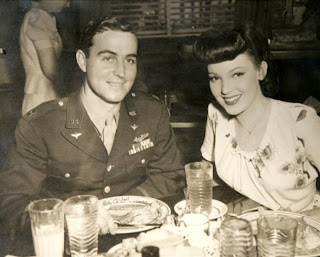 Nice photo of Darnell with US serviceman, looking fresh-faced like a (dream) girl next door. 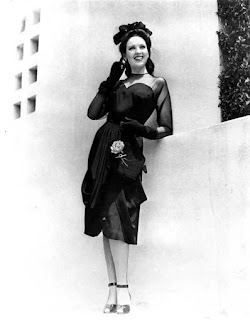 Most women don't dress like this anymore...
Posted by C.K. Dexter Haven at 8:11 AM 9 comments: