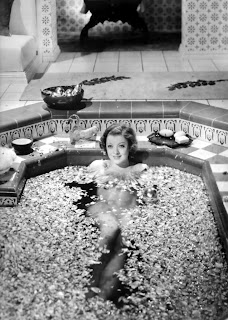 Never let it be said that we at HD don't honor requests. That is, we received our first (sort of) request this past week in Fluff..or Stuff?, which had Claudette "Sign of the Cross" Colbert as its main attraction. We're cleaning out the archive with the remaining bath photos we could find: Myrna Loy and another Colbert. I'm not certain which movie the Myrna pic came from. I haven't seen any of her pre-Code films! 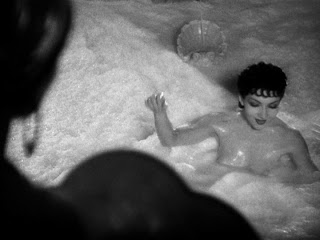 However, we have seen Sign of the Cross, which your blogger saw once upon a long ago when AMC--then known as American Movie Classics, now known as "A Million Commercials" or "A Million Cuts." AMC's demise, at least as a relevant classic movie channel, is the single saddest event of our classic-film-loving life. There are young people who love vintage films who cannot conceive of AMC ever being *the* source for amazing-quality, commercial-free movies. The world I grew up in is most definitely not the world I "inherited." Shame. 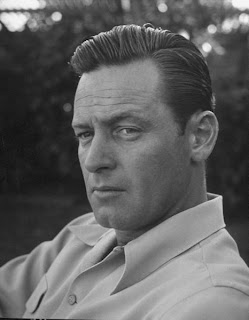 A childhood friend of mine used to do a dead-on but foul-mouthed impression of William Holden. It wasn’t a putdown of the actor, but our own (twisted?) way of paying tribute to a cherished performer. And we had nothing but admiration for William Holden. Even as kids we saw the kind of power and restrained rage he brought to a role. Holden was never over-the-top or stagy, even if my friend’s impersonation was. In fact, I’d have absolutely no difficulty in claiming that William Holden is my all-time favorite actor; yes, I know I anointed someone else with that title but all lists are subject to change.

There’s absolutely nothing dated, awkward, or stilted about his presence onscreen. The work he did in the light and fluffy Sabrina is just as fresh and entertaining as the tremendous and serious work he did in Stalag 17 and Network. Even in the less-inspired movies, Holden makes it worthwhile. The cliché about “getting better as they got older” applies to no one more so than it does William Holden.

I've been watching several of his movies lately: Sabrina, The Wild Bunch, Network and of course, Stalag 17, which was a childhood favorite that was also a family favorite; it was a film the men of the house would all watch together. I’ve been impressed with Holden's choice of roles, especially during the 1950s, when he was among Hollywood’s hardest-working actors. I first took notice of him as a kid, when he decked John Wayne in John Ford’s mixed-bag Civil War-era The Horse Soldiers (how’s that for a description?). 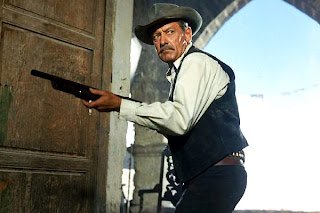 I've come to admire the Holden head of hair, the distinctive voice and the "Golden Boy" looks. I lament the fact that he never got to play detective Philip Marlowe, a role that would have fit the cynical Holden perfectly. Maybe it’s that cynicism that keeps the Holden flame burning. Perhaps that anger and bitterness he carried with him like he was always ready to chuck the whole Hollywood sham that made him rich, famous, and miserable.

Let’s face it: the guy was Joe Gillis, the screenwriter character from Sunset Boulevard and the part that made Holden’s career. Billy Wilder--one of the most cynical Hollywood characters of all time--was the perfect collaborator for Holden. However, whereas Wilder often injected humor to balance his cynicism and is usually thought of as a “comedy” director, it was Holden who made a career out of bringing to life cynical loners in every walk of life. A selection of Holden characters all fit this description: Joe Gillis, JJ Sefton, Pike Bishop, Ross Bodine, Bumper Morgan, Max Schumacher, Tim Culley, and Patrick Foley were all men on the outside, living what they thought was a self-reliant life but who were always broken by the system and who never truly fit in with the world; the eternal outsider. I remember reading in the Bob Woodward John Belushi biography, Wired, about Holden's bitterness concerning Hollywood and what a rotten town it was/is. I read this over twenty years ago, but the sentiment made quite an impression.

I shouldn't have been surprised, though. Even though one didn't expect to read hostile and negative sentiment from a so-called “success story” of Holden's stature. This from the same actor who was quoted as saying, “If that son of a bitch hadn’t died, I would’ve had my second Oscar”, referring to his Network co-star, Peter Finch, who won the Best Actor Academy Award posthumously in the scenery-chewing performance for the ages. The screenwriter for Network was Paddy Chayefsky, another master of the cynicism game. 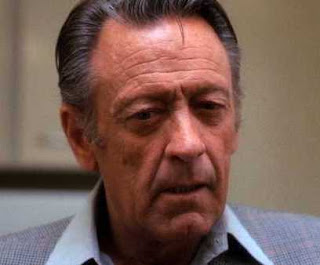 Holden’s was a career that never dipped or fell far from sight, despite more than a few failures. It’s still impressive how Holden kept turning in brilliant performances as he got older. Holden was robbed when he didn't even get an Oscar nomination for The Wild Bunch, his star power --not to mention his bone-weary tiredness-- carried that movie and I never tire of his performance. It isn't often that I can say that I'm happy Lee Marvin turned down a tough guy role, but in the case of The Wild Bunch, nobody could've done a better job than Holden.

As far as career legacy is concerned, I won't claim that William Holden is "forgotten", but he probably hasn't enjoyed the staying power in the collective memory of movie fans that lavish more attention on Holden’s contemporaries like Burt Lancaster, Kirk Douglas, or Robert Mitchum. I adore those actors but have come to the conclusion that William Holden is the more interesting and even superior actor, yet his ignominious end was a horrible and lonely death much like the kind Billy Wilder, Paddy Chayefsky…or Joe Gillis…might’ve banged out on his typewriter for a Holden protagonist.
Posted by C.K. Dexter Haven at 12:01 AM 6 comments: 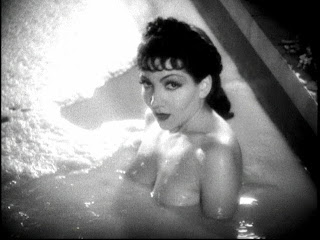 When it comes to blogging, I often wonder what people prefer to read--is it the in-depth, long-winded style entry with lots of personal opinions and some well-worn data? Or is the quickie post with a swell picture and a few pithy remarks better-suited to get you through your day?

Whatever one's preference, it seems like the quicki-fun pic o' the day gets more comments--comments make this blog go 'round--but they aren't as interesting as say, a nuanced review of a film that hopefully points out things that haven't been done to death already by blood-sucking scholars in their endless quest to drain the life out of popular culture.

The in-depth posts tend to get a few interested responses, unless of course it's a broadside taking a huge--and hopefully well-argued--series of unsparing but backed-up shots on a movie or performer but they don't have the popularity of the simpler, more being-at-work appeal. The former was done on Elizabeth Taylor: The Shrillness of You. That entry got lots of great pro-and-con comments from classic film lovers and it was fun--and cathartic--to do though too many of those "I dislike such-and-such a performer and movie" thing gets too quarelsome after awhile.

What do you, my dear readers, think? What do you like best about Hollywood Dreamland? What kinds of entries do you like/dislike? I'd put that widget beneath each post but I'd prefer an interactive dialogue. Constructive criticism is always welcome.
Posted by C.K. Dexter Haven at 8:41 AM 16 comments:

Email ThisBlogThis!Share to TwitterShare to FacebookShare to Pinterest
Labels: Miscellaneous

More Stars Than There are in the Heavens 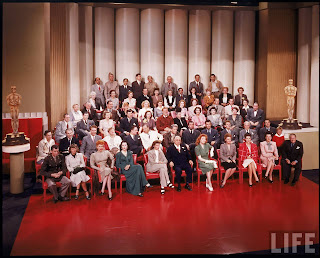 This is the Metro-Goldwyn-Mayer alumni, circa 1944. Look at who's there! Kate Hepburn doesn't look too happy to be there. Robert Benchley's on the far right, third row; he'd be dead by the end of 1945. James Stewart's in his Army Air Force uniform and would be "playing soldier" for real. There are few notables missing, and it'd be more challenging to see who isn't there!
Posted by C.K. Dexter Haven at 1:31 PM 10 comments:

Email ThisBlogThis!Share to TwitterShare to FacebookShare to Pinterest
Labels: 1944, MGM 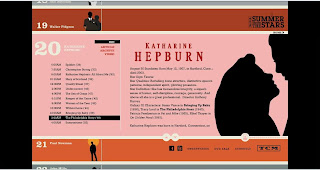 Turner Classic Movie's Summer Under the Stars is an addiction! They've earmarked August 20 as Katharine Hepburn's day and on top of that, they're playing many films from my favorite Kate era, the '30s and '40s! I've already reviewed Kate's performances in several of these movies and I'm long overdo in my review of Without Love (1945) (airs @10PM EST), which will hopefully be ready by the end of this month.
I also love the special graphics that TCM puts on their website. Let's hope the snazzy images snare unsuspecting youngsters and they're swept up into classic film.
Posted by C.K. Dexter Haven at 6:59 AM 3 comments:

The Ex-Mrs Bradford on DVD 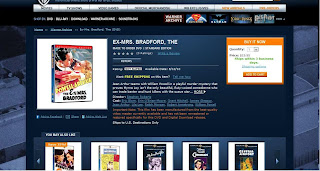 The Warner Brothers Archive has come through once again, as on August 10th, they released a DVD on demand of Columbia Pictures' 1936 mystery-comedy, The Ex-Mrs. Bradford. The film, a Thin Man take off starring William Powell and Jean Arthur, was reviewed here in these very pages last August. I didn't exactly love the movie but most any film in what I call the Husband and Wife Detective genre is well worth seeing.
Posted by C.K. Dexter Haven at 9:38 AM 2 comments: 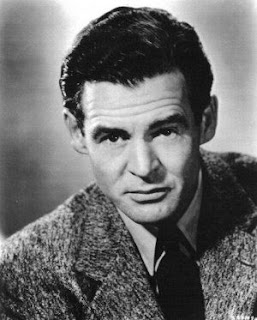 Friday August 13 is Robert Ryan's turn in TCM's Summer Under the Stars. I'm thrilled at some of the films they've scheduled, especially those 1940s Westerns and 1973's The Outfit, which will find me up at 4am to watch--no fancy recording technology at this residence, folks! Ryan's day also reminds me that I should be horrified that he didn't make my top ten actors list earlier this year. I'm embarrassed and ashamed that Ryan didn't make the cut...same with William Holden, his Wild Bunch co-star, especially since I've been a fan of both for decades! I guess I need to re-do that list again. As for Ryan and Holden, writer Eddie Muller had a great line about the two veterans' roles in the 1969 film, saying that "Holden and Ryan are engaged in a Mexican standoff over who can project a more bone-weary tiredness." Great stuff! Ryan and Holden are alike in that their acting is timeless and that they adjusted and seamlessly fit in with whatever type of movie they were in.

Ryan often played roles which found his characaters to be friendlessly psychotic and perpetually on edge, ready to lash out at anything. The man himself was quite different but he's remembered for his earlier, sinister roles. When it came to Noir, Robert Ryan personified hostile malevolence just as Robert Mitchum was the face of existential indifference. For anyone unfamiliar with Robert Ryan's work, check out TCM this Saturday. Here's Turner Classic's Robert Ryan schedule, lovingly copied and pasted for your perusal, with the bold titles being my personal recommendations--and please, someone record The Outfit!!! 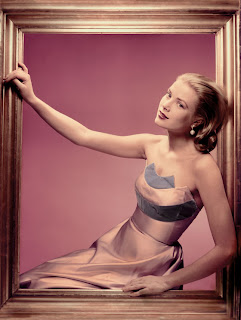 Had a swellegant, elegant time in London even if I wasn't able to stay as long as I wanted and see as much as I'd have liked. Still, I had a tremendous time there--great weather, too--and was actually sad about coming home! I'm exhausted from jet lag but wanted to touch base again, as it's been awhile.

As for Golden Age of Hollywood-related things, the Victoria & Albert Museum--do go if you get the chance--had a Grace Kelly exhibition entitled Grace Kelly: Style Icon, which runs until September 26. My wife loved this and I know many HD readers will, too.
Posted by C.K. Dexter Haven at 5:15 AM 11 comments: