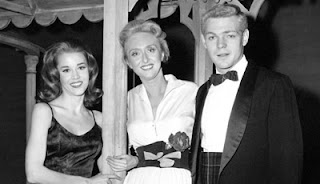 James MacArthur, one of the best-remembered TV sidekicks, has died at age 72. He's best known as detective Danny Williams in the original Hawaii Five-O. Here's a nice picture of him with Jane Fonda and Celeste Holm, in what looks to be the late '50s or early '60s. MacArthur was the son of stage and screen legend Helen Hayes, who adopted James when he was an infant. MacArthur grew up with showbiz personalities all around him, yet always came off as a nice, unassuming guy. Yours truly is a huge Hawaii Five-O fan, and two years ago when I wrote Mr. MacArthur an email complimenting him on his work, he was kind enough to take the time to respond with a nice email.

Email ThisBlogThis!Share to TwitterShare to FacebookShare to Pinterest
Labels: In Memoriam 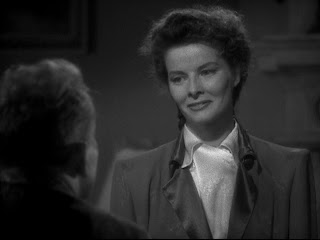 Without Love was originally a stage production about an American diplomat who comes to Washington, D.C. to persuade Ireland--neutral during WWII--to join the Allies by allowing English ships into Irish ports. The diplomat goes "undercover" as an Irish butler while staying with a wealthy American widow--Hepburn--who discovers his identity and offers to enter into a platonic marriage. 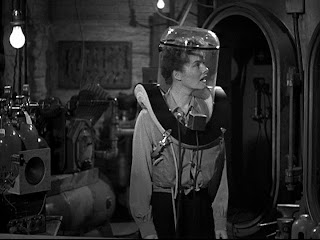 The film is one of Katharine Hepburn and Spencer Tracy's more obscure collaborations. It lacks, well, a lot. But a "big time" director like George Cukor, Elia Kazan, or George Stevens is noticeably absent, and is the first thing that springs to mind when watching Without Love. Instead, it's helmed by competent journeyman Harold S. Bucquet ("It's Booo-kaaaay!" as TV's Hyacinth would affirm), whose final film this was, as he would die in February 1946. Bucquet, best known for the Dr. Kildare series that starred Lew Ayres, is a strange choice for a Tracy-Hepburn vehicle. It's uncertain whether Bucquet was finally getting the chance to take on A-List projects or if he merely impressed Kate enough for her to bring him in for her next project with "Spen-suh." 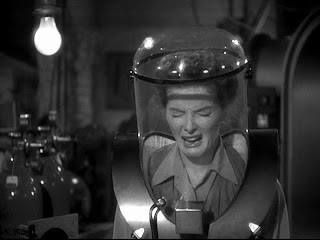 The movie itself is one of those affairs where everything seems to be ideal for a decent motion picture: we have a game cast with Hepburn and Tracy, a knockout crew of second bananas (Lucille Ball and Keenan Wynn), and a situation that could provide some on screen fireworks with that patented Tracy-Hepburn chemistry, but it just doesn't come together in this film. It's a huge wasted opportunity to establish Tracy-Hepburn after the triumph of 1942's Woman of the Year. Audiences wouldn't get that until 1949, with Adam's Rib.

Despite the hackneyed and contrived plot, Kate felt a degree of loyalty to playwright Philip Barry and engaged on a stage production. She wanted Spencer for the diplomat part, but the producers feared Tracy's binge drinking would put the kibbosh on the play. Instead, they cast the "blandly debonair" Elliott Nugent as the diplomat. When Nugent's drinking started in earnest (Ha!), Without Love suffered. 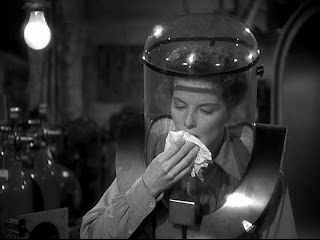 By 1945, MGM was looking for another smash follow-up to 1942's Woman of the Year and so Without Love's narrative was altered: the Irish political angle was jettisoned and was substituted with the post-war housing shortage, which is as dated an issue as the previous plot. In the final film, Tracy would play scientist Pat Jamieson, who's looking for a place to stay in Washington, D.C. and Kate would play a widow, Jamie Rowan, providing him room and board and the two later agree to marry with the agreement that their relationship remain platonic; hence the title, "Without Love." Hepburn ends up assisting him in his kooky experiments in what is supposed to be cute, funny, and downright wacky. Unfortunately, they're nowhere near being amusing. Oh, we do get one seen-in-many-a-Kate-Hepburn montage: that of her sneezing inside of a glass helmet and attempting to wipe her nose, only the helmet gets in the way. 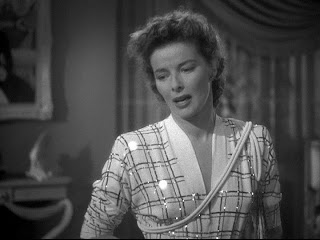 As to Kate's performance, watching her in Without Love playing her character, the widowed Jamie Rowan, is like witnessing Alice Adams' life ten years later; only she's widowed, creepy, and depressed. Kate haters will cheerfully point to her role here in order to make note of all the acting mannerisms that she's infamous for among her detractors. It's strange how a performer's lesser proclivities stand out when the film they're in is disappointing. Hepburn's performance betrays the screenplays stage--and stagey--origin. It probably didn't help matters any that Spencer Tracy's performance was inconsistent; sometimes he's engaged and interested, other times he's just not interested, what with the lame dialogue and fall-flat one liners he's given to spit out, all done in an offhanded and bored manner. There's also that damned dog that gobbles up valuable screen time; the mutt, named "Diz", is no Asta. 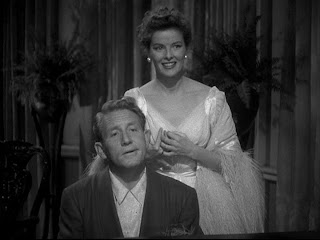 One thing I despise about many post-World War II films--specifically 1945-49--is the mawkish, cutesy, and regressive themes that took root in Hollywood. It's like everyone wanted to get back to "normal" and make sweet-saccharine-natured Americana. How could that even be possible after the horrific events of 1939-45? Thank goodness for Film Noir and B-Movies that dealt with the dirty underbelly of American life. The sanitized fantasy world of post-WWII films is discussed at length in Joseph C. Goulden's 1976 book, The Best Years: 1945-1950. In the chapter "The Movies Flicker Out", Goulden rips into the lifeless and empty offerings that Hollywood gushed forth in the years immediately following the war. Unfortunately, Without Love must be added to that long list of awkwardly-staged failures prevalent in the motion picture industry during the immediate post-war years.

I'll give Without Love another chance. Maybe when I'm in a big post-war mood where I want a "slice of life" after World War II movie, but then I'll probably just put on The Best Years of Our Lives instead.
Posted by C.K. Dexter Haven at 9:03 AM 5 comments: