The Hepburn Hurricane of 1938 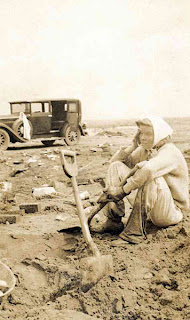 "My God. It was something devastating--and unreal--like
the beginning of the world--or the end of it--and I slogged and sloshed, crawled through ditches and hung on to keep going somehow--got drenched and bruised and scratched--completely bedraggled--finally got to where there was a working phone and called Dad." The first picture captures Hepburn's thoughts as to what she had just been through; a Category 5 hurricane. I've long been fascinated with this chapter in Kate's life. It's easy to imagine the plucky Hepburn taking charge of rescue and recovery, etc. in the wake of all that destruction. She's either great to have in a crisis or she is the crisis!

As someone who's been through their share of hurricanes--though nothing like that '38 storm, and that's including Hurricane Andrew--I find it to be a gripping story how Hepburn and her friends and family huddled in her stately home, Fenwick, located in Old Saybrook Connecticut, while destruction raged outside their door and soon destroying the home itself as well as nearly all of Kate's belongings, including her first Best Actress Oscar (later recovered).

It may cheapen the experience to say so, but I'd even watch a movie on this very subject. Kate vs. the Hurricane or Hepburn: A Tale of Survival. Okay, I really am cheapening the whole thing...

Here's the NOAA summary of the 1938 New England hurricane:

The Great New England Hurricane of 1938 was one of the most destructive and powerful storms ever to strike Southern New England. This system developed in the far eastern Atlantic, near the Cape Verde Islands on September 4. It made a twelve day journey across the Atlantic and up the Eastern Seaboard before crashing ashore on September 21 at Suffolk County, Long Island, then into Milford, Connecticut. The eye of the hurricane was observed in New Haven, Connecticut, 10 miles east of Milford. The center made landfall at the time of astronomical high tide, moving north at 60 mph. Unlike most storms, this hurricane did not weaken on its way toward Southern New England, due to its rapid forward speed and its track. This kept the center of the storm over the warm waters of the Gulf Stream.

Sustained hurricane force winds occurred throughout most of Southern New England. The strongest winds ever recorded in the region occurred at the Blue Hill Observatory with sustained winds of 121 mph and a peak gust of 186 mph. Sustained winds of 91 mph with a gust to 121 mph was reported on Block Island. Providence, Rhode Island recorded sustained winds of 100 mph with a gust to 125 mph. Extensive damage occurred to roofs, trees and crops. Widespread power outages occurred, which in some areas lasted several weeks. In Connecticut, downed power lines resulted in catastrophic fires to sections of New London and Mystic. The lowest pressure at the time of landfall occurred on the south side of Long Island, at Bellport, where a reading of 27.94 inches was recorded. Other low pressures included 28.00 inches in Middletown, Connecticut and 28.04 inches in Hartford, Connecticut.

The hurricane produced storm tides of 14 to 18 feet across most of the Connecticut coast, with 18 to 25 foot tides from New London east to Cape Cod. The destructive power of the storm surge was felt throughout the coastal community. Narragansett Bay took the worst hit, where a storm surge of 12 to 15 feet destroyed most coastal homes, marinas and yacht clubs. Downtown Providence, Rhode Island was submerged under a storm tide of nearly 20 feet. Sections of Falmouth and New Bedford, Massachusetts were submerged under as much as 8 feet of water. All three locations had very rapid tides increased within 1.5 hours of the highest water mark.

Rainfall from this hurricane resulted in severe river flooding across sections of Massachusetts and Connecticut. Three to six inches fell across much of western Massachusetts and all but extreme eastern Connecticut. Considerably less rain occurred to the east across Rhode Island and the remainder of Massachusetts. The rainfall from the hurricane added to the amounts that had occurred with a frontal system several days before the hurricane struck. The combined effects from the frontal system and the hurricane produced rainfall of 10 to 17 inches across most of the Connecticut River Valley. This resulted in some of the worst flooding ever recorded in this area. Roadways were washed away along with sections of the New York, New Haven, and Hartford Railroad lines. The Connecticut River, in Hartford reached a level of 35.4 feet, which was 19.4 feet above flood stage. Further upstream, in the vicinity of Springfield, Massachusetts, the river rose to 6 to 10 feet above flood stage, causing significant damage.