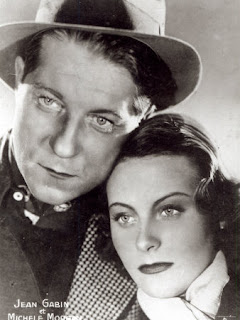 Yesterday TCM featured French actor Jean Gabin (though NOT Quai des Brumes (1938), pictured above) by airing his films in its annual August Under the Stars showcase. Yes, I'm quite pleased!

The poll results of last month's question, "Should TCM air more foreign films?" ended 19-16, with the yays edging the nays.

If yesterday's Gabin marathon is any indication, perhaps enough viewers want to see more foreign films on TCM, or better still, a separate channel dedicated to foreign far, with a Euro-Robert Osborne type--or Elvis Mitchell--taking on the hosting duties. It would be a refreshing change...for a change.

The Gabin festival reminded me once again of how little of international film I've seen. My own preference is for the Nouvelle Vague films of the 1950s and '60s, but seeing movies from a pre-WWII vintage would be an exciting and no doubt eye opening experience and tie in with this blog's focus, as well. 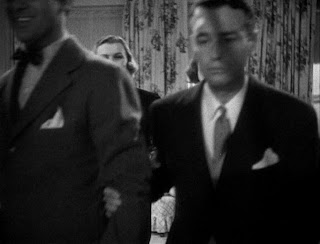 Holiday (1938; Dir. George Cukor) is among my all-time favorite movies, but while watching it this morning I noticed the boom microphone shadow across Lew Ayres' face. Ayres' performance, along with the rest of the cast, is impressive. The fact that Holiday is one of the most overlooked films of the Golden Age of Hollywood still baffles me. Perhaps it's due to it coming among Katharine Hepburn's "Box Office Poison" period, during which she made such "failures" as Bringing Up Baby. But unlike that Howard Hawks masterwork, Cukor's Holiday hasn't garnered the overdue praise that befits a movie of its quality...visible boom notwithstanding.

I've written about Hepburn's excellent performance in this film before, but the things that draw me to Holiday time and again are the social commentary and class distinctions, all set during the powderkeg economic conditions of the 1930s.
The most famous--and amazingly prescient--line of dialogue is spoken by Cary Grant's Johnny Case character, a footloose and happy-go-lucky guy who's nonetheless seriously trying to "find himself" decades before baby boomers made that phrase commonplace. It's no surprise that Holiday enjoyed a small surge in popularity during the late sixties and early seventies, when another round of social upheaval was present:

"When I find myself in a position like this, I ask myself what would General Motors do? And then I do the opposite."

The film also touches on the political instability of the era. The fascist states in Germany and Italy were reviving the economies shattered by the 1929 stock market crash. There was much speculation about Capitalism's viability in those dark times, so the idea of Fascism--and Communism--seemed like options worth considering to many people. However, Holiday doesn't embrace any of those totalitarian systems, but it does raise the questions on peoples' minds in 1938. The Setons' cousins, Seton and Laura Cram (Henry Daniell and Binnie Barnes) areseen as cold, almost sinister beings and it's a more-than-subtle warning about those other systems. The liberals, Professor and Mrs. Potter (Edward Everett Horton and Jean Dixon) take exception to the beliefs of the Crams, as this exchange indicates:

Seton Cram: "It wouldn't take that long [to make more money] if we had the right kind of governement."

It's these social commentaries that help make Holiday such an interesting movie. Yes, the romance between the leads is the main focus, but in these class distinctions it's fascinating to see how American society is portrayed here. Like all great works of art, Holiday holds something new for the viewer with each viewing. It's one of the great--if forgotten--films of the 1930s. 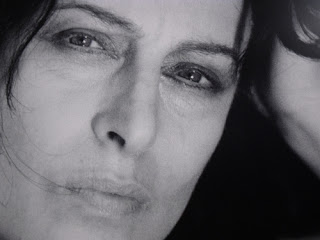 In another post, someone in the comments section mentioned Anna Magnani in The Fugitive Kind (1960). I had caught part of a scene when TCM aired this film a couple of weeks ago and was immediately interested in Anna Magnani's performance. I'm only familiar with her as being a Best Actress winner for The Rose Tattoo, but it's interesting that she was cast in Tennessee Williams adapatations, which were in vogue in Hollywood during the 1950s and early '60s; Williams was cutting-edge material during that time.

As for Anna Magnani, I've read wildly varying opinions of her role in The Fugitive Kind: She was brilliant, she couldn't speak the lines properly, she had no chemistry with Brando, she was overrated...wait, scratch that; I never want to hear, see, speak, or write that word again...

From that brief exposure to her, I have to say that Anna Magnani was a magnetic screen presence. She's not "beautiful" and her appearance is, shall we say, "unpolished" by Hollywood standards, but whether she knew how to pronounce her dialog correctly or not, whatever it was she had, Magnani radiated charisma and a conviction to the character's emotions. I could sense her power and passion and all that simmering energy she obviously had.

With my burgeoning interest in foreign films, I have to explore the career of this charismatic star; particularly her foreign language roles. For years, I dismissed Anna Magnani as a one-shot Oscar winner who subsequently toiled in obscurity, but the faintest of glimpses into her work has picqued my interest.
Posted by C.K. Dexter Haven at 6:32 AM 3 comments: